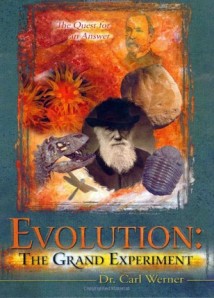 Recently, I received a copy of Carl Werner’s Evolution: The Grand Experiment – Volume 1. I’d first laid eyes on this book at Answers in Genesis’ Creation College 3, but I hadn’t really had a chance to flip through it. If I had, I would’ve bought it right there on the spot. It’s that good!

As promised, this book is presented in an easy-to-read format aimed at the general public. My kids loved the beautiful full color photographs of fossils and animals, abundant throughout. I loved the way it makes its points effectively in both words and pictures. The visually-engaging charts and diagrams are exactly the sort I like to use in my presentations – the kind that get the point across with simplicity and clarity. His book is a Godsend for visual learners.

Evolution examines the most familiar arguments for evolution and the origin of life with plenty of Aha! Moments throughout. After noting how scientific experimentation proved the theories of acquired characteristics [eg. Lamarckism; and shame on you, …] and spontaneous generation [though the altter only after some 2100 years of acceptance], Werner explores the limits of adaptation, natural selection and the modern evolutionary theory of chance beneficial mutations.

Some of my favorite moments from the book:

This book also gives special attention to whale evolution and dino-bird evolution [with a nice survey of Chinese “feathered” dinosaur finds], which are promoted these days in textbooks, museums and by the likes of National Geographic in a trumpeting fashion reminiscent of how they used to laud the horse series. Well, until baraminologists took the wind out of their sails by positing that all members of the horse series [no matter how many toes] were members of the same created kind, with the exception of Eohippus. Critiques of both the whale and dino-bird arguments are comprehensive and well-presented.

The information in Evolution: the Grand Experiment is well documented and presented in a readily understandable and engaging manner. This is the type of book you don’t mind pouring over again and again. Honestly, the book is worth is for the trove of fossil photographs alone. [Anybody who knows me knows how I love trilobites, dinosaurs and pterosaurs.]

Though my young children enjoyed looking over the pictures [and they asked a lot of questions!], I think this book would be most appropriate for the middle school to high school student. It’s versatile enough that it can be used to teach general concepts at a younger grade level and used in later grades to go deeper. I would also recommend it to anyone who simply wants a general [but comprehensive] overview of the issues and problems surrounding evolution and the origin of life.

The only thing I would change is the chapter order. The last few chapters [on fossils of flowering plants and the origin of life, respectively] just seem like they should go somewhere else. I dunno. It just seems out-of-order. I’d recommend the origin of life chapters be placed between the chapter on spontaneous generation and acquired characteristics and that the flowering plant fossil chapter be placed in the midst of the chapters that explored the comprehensiveness of the fossil record.

Nevertheless, I am absolutely stoked about Evolution: the Grand Experiment and I can’t wait to check out the next book in the series. I might even check out the DVD series they designed to supplement this book.

You can buy Evolution: The Grand Experiment at the DefGen.org eStore.

Disclosure of Material Connection: I received this book free from the publisher through the New Leaf Publishing Group Book review program on CreationConversations.com <http://www.creationconversations.com/group/bookreviewersfornewleafpublishinggroup>. I was not required to write a positive review. The opinions I have expressed are my own. I am disclosing this in accordance with the Federal Trade Commission’s 16 CFR, Part 255 <http://www.access.gpo.gov/nara/cfr/waisidx_03/16cfr255_03.html> : “Guides Concerning the Use of Endorsements and Testimonials in Advertising.”