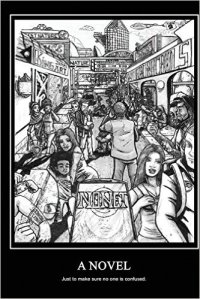 The premise of No Net is intriguing. Basically Noah Nichols asks, “What if the Internet suddenly vanished in the not-too-distant future?” Over the course of 20 chapters, Nichols’ message shines through: We should be careful not to neglect the things that are truly important in the midst of the noise and fury of technological diversions.

Unfortunately, the message is muddied by a premise that the world would descend into chaos if the Internet vanished and I just never quite bought that premise. Maybe it’s because of Y2K. I’m just cynical about that sort of thing, because I know there will always be folks who know how to do things the old-fashioned way. Maybe the loss of the Internet would seem like the end of the world to a younger generation who grew up with its ubiquitous presence, but that’s the point: it would only seem that way.

The world would not descend into chaos, especially not the sort of senseless, over-the-top Cannon Films inspired B movie carnage candy that makes up the first few chapters. The second chapter is just nonsense and noise strewn with robots, rapid-fire carnage and a suddenly murderous anti-herione. Martial law descends afterward. The President is attacked in an ice cream shop. A serial killer goes on a spree. Gangbangers get mowed down in a drive-by. All because of the sudden loss of the internet?? That’s a whole lotta nope right there.

Ironically, before the blackout, we have a murderous domestic dispute between two people who speak in flowery prose that is quite unbelievable (especially given the fact that they speak quite normally in a flashback scene later; seriously, I had to force myself through the prose of that first “app”). That particular patch of violence is triggered by our addiction to technological diversion at the expense of human interaction.

The cause of the internet blackout is never given. It appears to be as arbitrary as the author’s decision to call his chapters apps. Oh, he gives a few suggestions, and even suggests that at least someone still has access to it, but all of the suggestions seem far-fetched. Just as far-fetched as having poorly programmed, lethally armed robots running around the place.

I think the author simply took the idea of organic chaos too far. It feels like he wanted to write something very post-modern in the vein of Pulp Fiction or Sin City, but the characters just seemed random. The violence and horror seem more gratuitous than organic. There’s a masked serial killer who runs around killing folks at random. Someone just happens to be able to sneak a rocket launcher into a place with those aforementioned closet Terminator security robots. The President is eating ice cream while the world descends into chaos and nearly gets assassinated for the idiot move of not bringing along enough Secret Service. These improbable things are just the tip of the spear.

I should also mention that there’s no discernible plot, unless you count: The Internet vanishes and a horror show follows that is almost completely unrelated to its sudden disappearance. The character aren’t well developed; the only predictable thing about them was that they could be counted on to act vulgar, violent and irrational. Perhaps it’s because its because this book focuses on the depravity of man, but I struggled to like even one single character. There are a few characters who get developed, but there is no identifiable protagonist.

I can’t really recommend this book. It just doesn’t make any sense and it doesn’t go anywhere, which is a shame because the premise and the message are just awesome.

-Tony Breeden
From the Bookwyrm’s Lair

Disclosure of Material Connection: I received this book free from the author for review. I was not required to write a positive review. The opinions I have expressed are my own. I am disclosing this in accordance with the Federal Trade Commission’s 16 CFR, Part 255 : “Guides Concerning the Use of Endorsements and Testimonials in Advertising.”