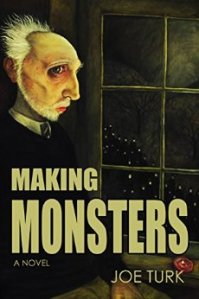 Joe Turk’s Making Monsters is a well-paced apocalyptic novel that you’re either gonna love or loathe.

I personally loved it. Probably for all of the wrong reasons. I like the fact that he starts off with a dystopian America that’s artificially divided in a way that reminds one of the Divergent series. It is their very isolation into various industries without the input and balance that would be provided by the others that allows the books later pandemics and holocausts to emerge. That, in itself, makes his book instructive, especially where it concerns how polarized America has become over political and social issues as of late. The Melting Pot makes us strong; the current tribalism will see to our ruin.

And such ruin Joe Turk imagines for us!

It’s as if the author thought about writing an apocalypse, but he couldn’t really decide which one he wanted to write. I mean, there are so many great choices really: zombie epidemic, giant monsters, nuclear holocaust, genetically engineered extinction… And Turk smiled an impish smile and said to himself, Why choose? Why not let them all race to see who can be the first to put humanity [and dare I say the planet] firmly in the history books? My only regret is that he didn’t include alien invasion and meteor impact as contenders. Maybe that would’ve been overkill…

In any case, it’s quite a show there at the end! You find yourself really rooting for the characters he’s presented to us, even if they are just a bunch of misfits trying to stage a belated revolution against their dystopian country. You find yourself equally hard-pressed to conceive of a way they could survive the perfect storm Turk dreams up for them.  It is certainly dark at times (read: apocalyptic fiction, dude) and, as usual in these types of tales, human beings oftimes prove as deadly as the monsters. It could have used more Mongolian Death Worms.

In short, Making Monsters is a fast-paced summer read for anyone who appreciates a good fantasy adventure about the End of Days. Especially if you can’t decide how you want it to end.

Tony Breeden
From the Bookwyrm’s Lair

Disclosure of Material Connection: I received this book free from the author for review. I was not required to write a positive review. The opinions I have expressed are my own. I am disclosing this in accordance with the Federal Trade Commission’s 16 CFR, Part 255 <http://www.access.gpo.gov/nara/cfr/waisidx_03/16cfr255_03.html> : “Guides Concerning the Use of Endorsements and Testimonials in Advertising.”