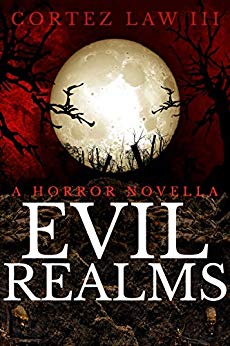 Cortez Law’s Evil Realms is a standout novel amid the genre of Christian spiritual warfare/horror fiction that I have read. Rather than relying on angelic and demonic characters to fill us in on what is happening in the spiritual realm, he paints his story from the point of view of humans – flawed, authentic, believable humans who are caught in the cross-hairs of a demonically inspired death cult.

It is at times horrific, but Law keeps the pace moving and keeps the pages turning to the book’s immensely satisfying ending. The peril feels very real and I found myself wincing more than once as I scrolled to the next chapter, sure that this character or that one was about to become the Satanic cult’s next victim. It certainly kept me guessing but Law had ties all of the narrative threads together quite skillfully by the book’s end.

I definitely recommend this read.

From the Bookwyrm’s Lair,
Tony Breeden

Walk Worthy Christian Life Center Pastor Joel Benjamin believes he’s hears God tell him to preach at several Georgia churches. However, he faces trouble on several sides: One, his wife and First Lady Deborah believes he didn’t. Two, he experiences an atmosphere of dread through a series of mysterious visions. And three, both find themselves the victims of cryptic messages from an unknown caller.Forces of palpable evil align themselves against the Benjamins. Forces that threaten to steal, kill, and destroy their present and future. But the marital acrimony sends them on the verge of breakdowns that create battles for mutual trust, unity, and faith.Why does God allow bad things to happen to some people? For the Benjamins, maybe God had nothing to do with it. Maybe some choices in the past open the door for the supernatural activity that relentlessly haunts and torments them.“A house divided against itself cannot stand.” Either the Benjamins feed their faith and live or they feed their fear and die.

Disclosure of Material Connection: I received this book free from the author as an advanced reader copy (ARC). I was not required to write a positive review. The opinions I have expressed are my own. I am disclosing this in accordance with the Federal Trade Commission’s 16 CFR, Part 255[…] : “Guides Concerning the Use of Endorsements and Testimonials in Advertising